Australia spluttered to a 28-13 victory over Fiji but failed to secure a bonus point after dominating their opening Rugby World Cup Pool A match.

Number eight David Pocock claimed two tries from rolling mauls in the first half to lay the platform for the twice world champions and a try by prop Sekope Kepu soon after the interval set them on course for a comfortable win.

But Fiji rallied through a try by flyhalf Ben Volavola and an inexplicable decision by Australia to kick a penalty 10 minutes from time rather than go for a fourth try left the Wallabies a point behind England and Wales in the group.

“It was a really good work-out for us, very physical,” said Australia coach Michael Cheika.

“It was exactly what we needed and I was pleased with a lot of the things we did.

“We’ll turn the team around now for Uruguay on Sunday.”

They rejected the chance to kick a penalty and from the resulting lineout Australia formed a rolling maul, Pocock touching down after 27 minutes.

Fiji prop Campese Ma’afu was sent to the sin-bin for kicking the ball away and the Wallabies immediately took advantage when Pocock grabbed his second try in identical fashion.

Australia led 18-3 at halftime and soon extended the advantage.

Fullback Israel Folau made an incisive break and with the Fiji defence in disarray Kepu showed neat footwork to get over the line.

Fiji had lost their opening Pool A match 35-11 to England five days ago. 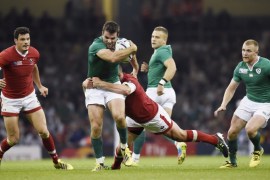