Ferrari’s Sebastian Vettel won an incident-packed Singapore Formula One Grand Prix while world champion Lewis Hamilton retired early for the first time this season and a spectator set heart rates fluttering when he strolled on to the track.

Hamilton was running fourth approaching the halfway point of the 61-lap race when he started losing engine power, rapidly dropping back through the field before he was told to return to the garage and call it a night.

Starting from pole position, Vettel had no problems, leading all the way to take the chequered flag for the fourth time at the floodlit Marina Bay Street Circuit, despite twice losing the big advantage he had built up when the safety car was deployed.

“It must be one of my best races. It was pretty intense,” Vettel said.

“Lots of pressure from behind; Daniel had a very good race looking after his tyres.

“Second stint I was dictating the pace. From then, I was trying to control the gap. We had a really great weekend. If we have more weekends like this, yes we can catch Mercedes. Massive attack. Maybe we can make the impossible possible – we will definitely go for it.”

Vettel’s win was the German’s third this season and the 42nd of his career, enabling the quadruple world champion to overtake the late Ayrton Senna into outright third place for the most lifetime wins, trailing only Michael Schumacher (91) and Alain Prost (51). 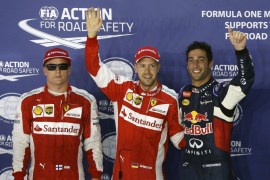 Vettel on pole for Singapore GP to end Hamilton’s reign