Valentino Rossi extended his MotoGP lead over Yamaha teammate Jorge Lorenzo to 23 points at the San Marino Grand Prix despite a strategy blunder that handed victory to Spaniard Marc Marquez.

Rossi had a record 92,000-strong home crowd on their feet and cheering as he took the lead at Misano’s Marco Simoncelli circuit in eastern Italy but the joy was short-lived in a thrilling dry-wet-dry race involving two pitstops.

With Marquez’s Honda team pitting the reigning champion to switch bikes again with 10 laps remaining, Rossi and Lorenzo – who had started on pole – stayed out.

Lorenzo eventually came in with eight laps to go and then crashed out on the next lap just as Rossi, who ended fifth, was brought in for his switch back to a bike with slick tyres.

Britain had two riders on the podium instead of the familiar faces, with Bradley Smith second for Tech3 Yamaha after staying on slick tyres during the rain shower and coming through from 19th place.

Rossi now has 247 points to Lorenzo’s 224, with Marquez on 184 with five rounds remaining.

“I was behind the Yamahas and was trying to check how was the asphalt and the tyres and I saw that Lorenzo and Valentino had big degradation,” said Marquez.

“I said now is the time to change the tyres and when I changed then I saw that the track was completely dry, but it was difficult to understand,” added the Spaniard after his fourth win of the season and 23rd of his career. 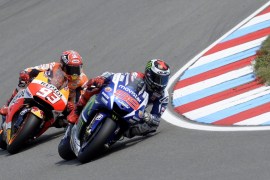 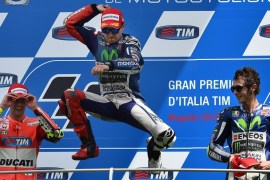 Lorenzo closes in on Rossi with third straight win