The Mets got three doubles from centre fielder Yoenis Cespedes, who drove in four runs in his third game since New York acquired him from the Detroit Tigers on Friday.

Elsewhere, David Price struck out 11 in his Blue Jays debut, and Josh Donaldson hit a two-run homer, as Toronto defeated the Minnesota Twins 5-1.

Price (10-4) was cheered loudly as he warmed up before his first start since he was obtained from the Detroit Tigers on Thursday.

The left-hander allowed three hits, two walks and one run in eight innings for his first win since July 9.

He had been 0-2 with a no-decision in his final three starts with the Tigers. When he walked off the mound after the eighth, he received a standing ovation and tipped his cap in return. 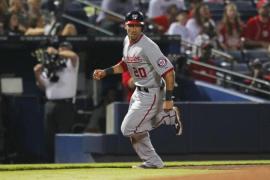