Ferrari’s Sebastian Vettel blasted tyre supplier Pirelli after a high-speed Belgian Grand Prix blowout that he said could have had grave consequences.

The German, who finished 12th, was in third place when the right rear tyre failed on the penultimate lap only moments after he powered through the daunting Eau Rouge sweep at about 300kph.

“Things like that are not allowed to happen. Full stop. If it happened 200 metres earlier, I am not standing here now,” the four-time Formula One world champion told BBC.

Feature: Rationalising risks inside the cockpit

Vettel, who was competing in his 150th Formula One race, said the drivers needed to discuss the situation before Ferrari’s home Italian Grand Prix at Monza, the fastest track on the calendar, in two weeks’ time.

“It’s probably not as bad as it was in Silverstone some years ago but it’s not acceptable,” he said, referring to tyre failures at the 2013 British Grand Prix that led Pirelli to change the construction.

Vettel had made only one stop, whereas Pirelli had indicated at least two would be expected, and had done 27 laps on the medium tyres in an aggressive strategy.

“If you look at the images, the actual carcass was still intact. It was a wear issue,” Pirelli motorsport head Paul Hembery told reporters.

“If the race had been one lap less, he’d have been on the podium and you’d have said what a genius move,” added Hembery.

“Friday was a cut and in this case it was wear. The tyre was finished.”

Vettel’s compatriot Nico Rosberg, driving for champions Mercedes, suffered an explosive failure on Friday that Pirelli concluded was caused by a cut from an external object and not due to any structural failure. 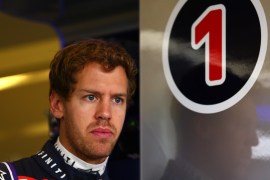 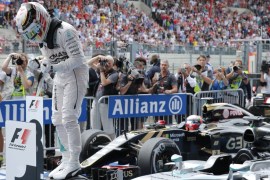