Rosberg finished two seconds behind the Briton, in a dry race despite teams anxiously studying weather maps for approaching rain in the final stages, to complete Mercedes’ seventh one-two in 11 races.

“Today was a dream and the car was fantastic all weekend,” declared Hamilton, who controlled the race from the opening lap – after an aborted first start – and never looked threatened by his German rival.

“I was never in a position where I felt nervous, I had great pace in the car. There was no real need to push more than I had to,” he added.

France’s Romain Grosjean took an emotional third place for Lotus after Ferrari’s Sebastian Vettel, in his 150th race and the team’s 900th, suffered a right rear tyre blowout on the penultimate lap.

Hamilton has now won six races this season, and 39 in his Formula One career.

The double champion has 227 points to Rosberg’s 199 and Sunday was also his 80th podium appearance, equalling the achievement of boyhood hero and late triple world champion Ayrton Senna.

Russian Daniil Kvyat finished fourth for Red Bull after a late charge through the field with Mexican Sergio Perez, who had stormed into second place at the start, finishing fifth for Force India. 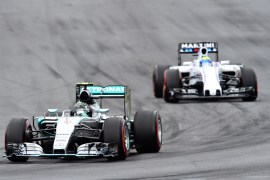 Rosberg closes in on Hamilton after Austrian GP win

German moves to within 10 points of double world champion after take the chequered flag in Austria.