The defending Formula One champion won his 10th pole in 11 races this season by leaving Rosberg nearly half a second behind in qualifying. Hamilton has missed out on pole only once this season, to Rosberg.

Rosberg dominated the first two practice runs on Friday, despite a scary tire puncture in the afternoon session. But in the third run ahead of qualifying, Hamilton was faster by half a second.

Hamilton is looking to increase his 21-point lead over Rosberg in drivers’ standings and take his sixth victory of the season.

This was the British driver’s 48th career pole and made him the first driver since Michael Schumacher in 2001 to take six straight.

“The car is feeling great on the circuit,” Hamilton said. “Pole position is great but it’s a long race.”

Rosberg said the high-speed puncture had unsettled him.

“We don’t really understand it, for sure it’s worrying,” the German said. Tire maker Pirelli said the blowout was not due to a structural failure but probably caused by something on the track.

Valtteri Bottas was third in his Williams for his best result in qualifying this season. Romain Grosjean was fourth in his Lotus but will be dropped five places for a gear box change.

Force India’s Sergio Perez was fifth, while last year’s winner in Spa, Daniel Ricciardo, was sixth in his Red Bull.

Felipe Massa was seventh for Williams, followed by Pastor Maldonado in the second Lotus.

Ferrari’s Sebastian Vettel was a disappointing ninth after winning in Hungary, the last race before the summer break.

Carlos Sainz completed the top 10 in his Sauber.

Kimi Raikkonen, a four-time winner in Belgium, was eliminated in the second qualifying session when his Ferrari sputtered to a stop. 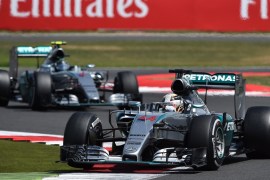