Serena Williams feasted on familiar prey as she reached an eighth Wimbledon final with a superb 6-2 6-4 victory over Maria Sharapova, her 17th win in a row over the Russian.

The five-time champion is one match away from reinforcing her stranglehold on the women’s game by holding all four grand slam titles at the same time, a feat she will achieve for the second occasion if she beats 20th-seeded surprise package Garbine Muguruza of Spain in Saturday’s final.

“I’m so excited. I got a bit nervous because it was a semi-final and it’s a long time since I’ve been this far,” said Williams, who last reached the Wimbledon final in 2012.

“I’m excited to get through it. Maria played well and when she stepped up, I managed to step up. It wasn’t easy, it was interesting.”

Sharapova could not deal with the ferocity of the Williams return, her serve crumbling as the American increased the pressure.

The Russian is one of the game’s most powerful hitters but looked overawed at times in the face of Williams’s sledgehammer game.

Double faults are a familiar flaw for Sharapova, but three in the opening game handed an early break and the initiative to her opponent.

It was then one-way traffic as a cool-headed Williams set about savagely dismantling her opponent.

The world number one launched an attacking barrage, breaking twice in the first set, which she clinched in 33 minutes with a scorching backhand winner.

The second set was closer as Sharapova ditched all caution and came out swinging, but when Williams broke for a 3-2 lead, the outcome seemed inevitable.

Earlier, Muguruza became the first Spanish woman to reach the Wimbledon final since 1996 as Agnieszka Radwanska was left rueing a botched Hawk-Eye challenge in the last game of her 6-2 3-6 6-3 Centre Court loss.

As an enthralling duel neared its conclusion the 21-year-old Muguruza was serving at deuce, 5-3 and thumped a deep drive that Poland’s Radwanska scrambled back before stopping mid-rally to challenge after hearing shouts of “out” from her coaching team.

The Hawk-Eye screen showed Muguruza’s shot had actually landed on the outer portion of the dusty baseline and even though the Spaniard’s next shot was out, the point was already hers as Radwanska had put her fate in the hands of technology.

Radwanska glared towards her box, Muguruza punched the air in relief and seconds later was celebrating victory after swinging away a volley to end the thriller and set up a Saturday afternoon date with Serena. 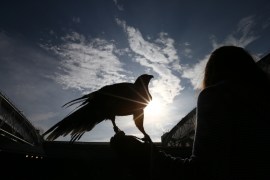 A Harris patrols the skies at dawn to scare away any pigeons that may interrupt play at the Wimbledon courts. 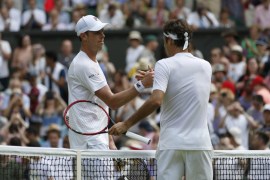 Seven-time champion wants a bit of colour to be allowed and the rule relaxed. 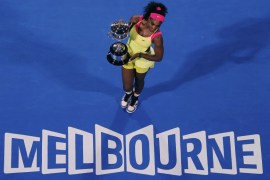 World number one bags her 19th Grand Slam – her sixth title in Melbourne – with a straight-sets win over Sharapova.