Wimbledon, UK – Born in Kazakhstan, raised in Czech Republic and now based in China, Zarina Diyas had former world number one Maria Sharapova working overtime under the summer sun on Wimbledon’s Court One.

She led the five-time Grand Slam champion 3-1 in the second set of their fourth-round match.

Diyas had already equalled her Wimbledon best by reaching the fourth round. But she needed to win the set to have any hopes of bettering that – Sharapova had won the opening set 6-4.

Squaring up against someone who won Wimbledon aged 17, the now 34th-ranked Kazakh girl who started tennis “for fun” was out-muscled, losing the second set 6-4.

In the crowd was Diyas’ mother who watches the player’s every rally, takes photos, applauds her every point won and is there for the look of assurance when the point is lost.

“It was my mother who introduced me to tennis when I was aged six,” Diyas told Al Jazeera at the Wimbledon Championships.

“I used to watch the sport on TV but she took me to this little tennis academy in Prague for fun.

“Now she tries to come to most of my tournaments. She’s the one who’s supported me – on court and during surgery when I didn’t play for a year – and it’s nice to have the support when you lose a point and look into the stands.”

Diyas first set foot at Wimbledon seven years ago as a junior (she’s still only 21) and it has become her favourite tournament – and grass her favourite surface – not just because of the results on-court.

“I really like to play on grass but I love the tradition that is Wimbledon. The atmosphere is great. But the rule that you have to play in white, that’s brilliant. I’m a big fan of playing in white. I love it.”

Diyas was born in Almaty but moved to Prague aged five. She is now based in Guangzhou because of her coach Alan Ma and remains impressed with the facilities and the conditions.

At one point, Diyas was deemed surplus to Kazakhstan’s tennis requirements after the country started importing Russian players. Tennis has been developed greatly in recent years in a country where the infrastructure was built almost from scratch.

She holds no grudges despite being the only Kazakhstan player to have been born in that country.

“I think it was done for the good of Kazakhstan. Now we have a good Davis Cup team and tennis in Kazakhstan has started to grow. That’s a good sight.

“When I go back to Kazakhstan, I see so many kids playing tennis. Lots of people are interested and a lot of fans are writing to me. So it’s actually a proud thing for me to have helped tennis grow in my country.

“For me to be a role model for the kids, that’s just great.”

The fourth-round loss came as huge disappointment for Diyas but she is set to move further up the rankings as she marches gallantly towards her year-end aim of being in the top 20.

“She changes direction quite well,” Sharapova said of Diyas after their fourth-round match.

“I thought, especially in the second set, she started being more aggressive. When she finds those lines on the serve, it’s tough to get back.”

Words of encouragement despite the loss for Diyas, surely, who picked up the racket with no aims and dreams. Those followed when she started winning.

“Things became serious when I started to win matches. When I was nine, I won the U12 European tournament and even the coaches started saying I had a future in the game.

“I’d always liked tennis but you start liking and enjoying it more when you start winning. It becomes more natural to you.”

For now, her attention will turn from grass to the hard court season ahead of the US Open.

It won’t have the “traditional feel” to it like Wimbledon but can restart her bid to break into the top 10 and win a couple of Grand Slams. She hopes Wimbledon is among them. 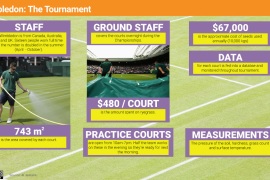