New England Patriots football star Tom Brady has taken the fight over his National Football League “Deflategate” suspension to the US federal court.

The NFL Players’ Association on Wednesday asked the court to overturn Brady’s four-game suspension – or at least put it on hold – until the case could be heard by a federal judge.

NFL Commissioner Roger Goodell on Tuesday had upheld a four-game suspension of the quarterback for his part in an alleged scheme to deflate footballs below league standards in the game that put the Patriots in the 2015 Super Bowl.

A ball inflated below NFL standards could make it easier to grip, especially in cold weather games.

“I am very disappointed by the NFL’s decision to uphold the four-game suspension against me,” Brady said in a statement posted on his Facebook page. “I did nothing wrong, and no one in the Patriots organisation did either.”

Brady also denied that he had destroyed his mobile phone to avoid giving it to NFL investigators, saying the flap was “manufactured” to distract from “zero evidence” against him in the scandal.

Patriots owner Robert Kraft threw his support behind his player, considered one of the NFL’s all-time greats.

“I was wrong to put my faith in the league,” Kraft said in blasting Goodell for upholding the suspension. “I continue to believe and unequivocally support Tom Brady.”

Goodell on Tuesday said Brady, one of the league’s most popular and highest-paid players, admitted during an appeal hearing last month that he directed an assistant to destroy his cell phone around March 6. That was the day he was due to meet with league investigators.

The commissioner said Brady’s conduct suggested he was attempting to conceal evidence.

However, the four-time Super Bowl champion denied his phone, which the NFL said held some 10,000 text messages, contained any damning evidence.

“I have never written, texted, emailed to anybody at anytime, anything related to football air pressure before this issue was raised at the AFC Championship game in January,” Brady wrote, referring to the American Football Conference game won by the Patriots.

The union said the decision to take Brady’s case to the federal court “gives the back of the hand to fundamental arbitral principles concerning procedural fairness and arbitrator bias”.

The decision should be reversed as Goodell denied Brady access to evidence and witnesses, and deprived him of a fair hearing, the union said.

Goodell initially levelled the penalty on Brady after a 243-page report from lawyer Ted Wells, whom the NFL hired to investigate the matter.

Wells said the scheme to deflate the footballs was carried out by two Patriots employees. Under NFL rules at the time, the home team took possession of game balls before kickoff.

The investigators said he determined that Brady probably knew about the alleged scheme largely on the basis of text messages between the employees that implied the quarterback was aware of the plan to deflate the footballs. 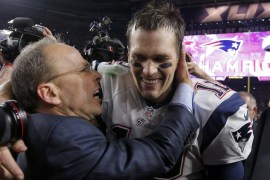 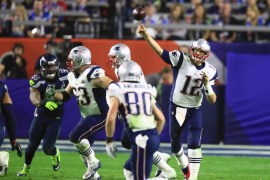 Patriots quarterback punished for his role in using under-inflated footballs during the AFC championship game. 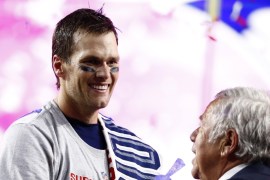