A hawk native to North and South America is ruling the roost when it comes to clearing the Wimbledon Championships courts of pigeons.

Every morning at dawn, a Harris hawk named Rufus, with his distinctive yellow-hued beak, patrols the skies over the tennis complex.

Its job is to scare the pigeons who, not so many years ago, occasionally interrupted play as they strolled around the courts, searching for food and doing what pigeons do.

For Rufus, pigeons are food, though the bird’s handlers and trainers, Wayne Davis, his wife Donna and their daughter Imogen, do their best to keep Rufus’s appetite balanced so the hawk will scare the pigeons but not eat them.

That is part of the art of falconry as it has been practiced for more than 2,000 years, said Wayne, although he cannot guarantee that Rufus will not occasionally go for the kill.

“Thousands of years of evolution have dictated that’s what he should do,” he said about what could happen if Rufus spots a pigeon and is feeling a big peckish.

“We haven’t evolved a hawk to catch things for our own purposes. We’re just utilising its natural abilities.”

Rufus has become something of an avian star at Wimbledon, his picture taken by countless photographers and television crews. He even has his own Twitter account @RufusTheHawk. 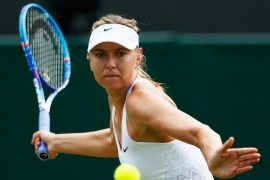