Chris Rogers and Steve Smith plundered superb centuries to lead Australia to a commanding 337 for one on the first day of the second Ashes Test against England at Lord’s.

The pair shared an unbroken second-wicket partnership of 259 to put their side in a strong position to level the series following their surprise 169-run defeat in the first match in Cardiff.

England’s only success of the day was the dismissal of David Warner, caught in the deep for 38 trying to hit his third four off Moeen Ali’s first over, and their pacers failed to extract any movement on an excellent batting pitch.

Australia captain Michael Clarke won the toss in overcast conditions and watched his openers bat comfortably through the first hour.

England skipper Alastair Cook brought on spinner Moeen in the 15th over and Warner carved his first two deliveries to the mid-wicket boundary in a clear statement of aggressive intent.

The pugnacious left-hander perished four balls later, however, caught by James Anderson at deep mid-off to end an opening stand of 78.

Rogers, who flashed Anderson’s third ball of the match just over the slips, maintained the form which brought him 95 in Cardiff and he and Smith carried Australia to 104 for one at lunch.

The pair continued to dominate as the sun came out in the afternoon and Rogers cut Stuart Broad to reach his eighth fifty in nine Test innings.

In Video: One Minute Cricket

Smith accumulated runs in his usual awkward but effective manner and also passed 50, the ninth time in a row he has passed the milestone when batting in the first innings of a Test match.

Runs continued to flow after tea and Smith hoisted Joe Root for six before pulling Anderson for four to reach his 10th Test century before Rogers followed his partner to three figures with a punch down the ground off Anderson.

The partnership rattled past 200, Rogers passed his highest test score and Smith nonchalantly continued the prolific form which has brought him eight test hundreds since the start of 2014.

Rogers will resume in the morning on 158 not out with Smith on 129 and Australia look to build a huge total to put the hosts under pressure. 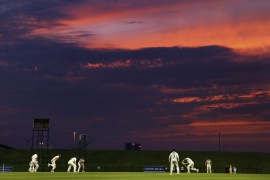 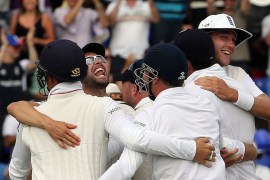