The 6-3, 6-7, 6-2 win also sealed Williams’ 20th grand slam, a feat that looked difficult after illness had prevented her from practising on the eve of the final.

The American looked completely out of sorts during her three-set semi-final win over Swiss outsider Timea Bacsinszky and said she “collapsed” once she walked off court on Thursday.

Safarova had reached the final after beating former winner Ana Ivanovic 7-5, 7-5 to become the first female Czech player in 34 years to reach the French Open final.

Safarova looked down and out as she trailed 4-1 in the second set.

However, she rallied back to lead 5-4 but Williams showed her class to win three games in a row to serve for the match.

Safarova was not finished yet. She broke Williams and forced the second set into a tie-break before winning it to square the match.

But Williams came back strongly in the deciding set and won the last six games to win the claycourt major for the third time after her 2002 and 2013 titles.

After winning the Australian Open earlier this year, Williams is in contention to become the first female tennis player since Steffi Graf in 1988 to win a calender grand slam.

“It was complicated, Lucie played very well, she’s a superb opponent, she was very aggressive,” Williams said courtside in French.

“I got a bit nervous but it’s alright, it’s a dream for me. To win it (the 20th grand slam) here is special for me because I don’t always play very well here.” 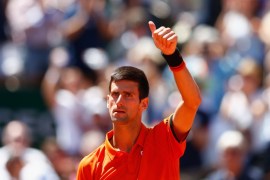 World number one to play his third final at Roland Garros in four years where he will face Wawrinka .