Lewis Hamilton seized pole position for the Austrian Grand Prix in a damp qualifying session that saw both the Formula One world champion and Mercedes teammate Nico Rosberg skid off on their final laps.

The pole was Hamilton’s seventh in eight races – the same number he managed in all of last season – and 45th of his career, taking him to third equal with Sebastian Vettel on the all-time list behind Michael Schumacher and Ayrton Senna.

It also completed a year of domination by Mercedes, with Brazilian Felipe Massa’s pole for Williams in Austria last June the last time any driver from outside the team has started from the top slot.

Feature: The making of Lewis Hamilton

“It was quite a difficult qualifying session for everyone because of the track conditions,” said Hamilton, who spun off at turn one as he started his final quick lap on a drying track after morning rain.

“I was pushing that bit extra on the next run and just locked the rears.”

Rosberg, who was two tenths slower than Hamilton going into his final lap, pushed just a bit too hard and careered across the runoff and into the gravel just as it seemed he was going to be quicker.

“I went on the astroturf out of the second to last corner. Maybe that was still a bit wet or something or I just overdid it after that, I’m not sure. I just lost it there into the last corner,” said the German. “I knew I had to go for it.”

Mercedes-powered cars filled five of the top six slots at a ‘power’ circuit.

Ferrari’s Kimi Raikkonen failed to get through the first phase of qualifying and was 18th before penalties are applied to others ahead of the Finn.

An element of farce was added to the session with McLaren’s Fernando Alonso and Jenson Button each facing 25 place grid penalties in a field of just 20 cars for exceeding their allocation of power unit components. 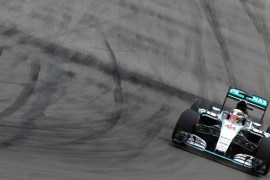 World champion on the podium for 14th successive race as he outpaces teammate Rosberg in Canada.