Jonny Bairstow bludgeoned a brilliant unbeaten 83 to lead England to a three-wicket win over New Zealand on the Duckworth-Lewis method, earning a 3-2 victory in the five-match ODI series.

In a rain-affected final game, Bairstow’s classy knock and a hard-hitting 41 off 30 deliveries from Sam Billings helped England chase down a revised total of 192 from 26 overs with six balls to spare.

World Cup runners-up New Zealand hit 283 for nine off 50 overs and looked to be heading for a comfortable victory after taking several early wickets.

Wicketkeeper-batsman Bairstow, replacing the injured Jos Buttler, then produced an innings worthy of a thrilling series that yielded more than 3,000 runs for the first time in a five-match ODI encounter.

“It’s been fantastic to come back in,” he said.

“The guys have put in some great performances in this series … to top it off is very special.”

England, who won the toss and opted to bowl, broke through in the first over when New Zealand captain Brendon McCullum (six) played on to a delivery from Steven Finn.

Martin Guptill (67) and Kane Williamson (50) then shared a stand of 94 before Ben Stokes dismissed the pair and the Kiwis were reduced to 155 for four.

New Zealand finished with a flourish when Ben Wheeler blasted a quickfire undefeated 39 that included 16 runs off the last three balls of the innings.

After a rain delay England’s reply got off to a dismal start with spinner Santner removing Alex Hales (one), Joe Root (four) and Eoin Morgan (zero) to reduce the hosts to 20 for three.

Stokes (17) quickly came and went and New Zealand were in complete control when opener Jason Roy was dismissed for 12 to leave his team 45 for five.

An unflustered Bairstow, however, turned the game around with his 60-ball innings.

The two sides will now now contest a one-off Twenty20 match in Manchester on Tuesday. 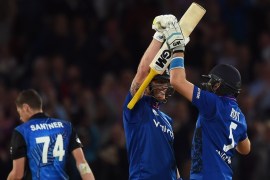