For the third year in a row, Roger Federer has been knocked out of the French Open before the semi-finals – the latest being a straight-sets defeat to fellow Swiss Stan Wawrinka.

This time, he bows out in the quarter-finals with a 6-4, 6-3, 7-6 loss to his pal and Swiss Davis Cup teammate Stan Wawrinka.

Federer had won 16 of their previous 18 matchups, but 2014 Australian Open champion Wawrinka was in control from the start of this one.

Federer’s collection of 17 Grand Slam titles includes the 2009 French Open, part of a stretch where he made it to at least the semifinals seven times in eight years.

Tsonga, who often suffers lapses in concentration, lost his momentum following a 40-minute suspension in play after a side panel from the scoreboard fell on the crowd from the upper part of Court Philippe Chatrier, injuring three fans.

Tsonga, a semi-finalist at Roland Garros in 2013, relied on his booming forehand to unsettle the US Open runner-up, who only got into his groove late in the second set after the interruption.

Tsonga, looking to become the first Frenchman to win his home slam since Yannick Noah in 1983, fell off the pace in the third and fourth sets, but was more focused in the decider. 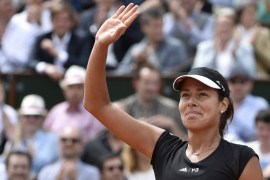 Serb seventh-seed beats Svitolina to reach her first grand slam semi-final since 2008 and will take on Safarova.