Doha, Qatar – Yemen’s second loss in as many games has pushed them to the bottom of Group H in the qualifiers held in Qatar’s capital, Doha, as they moved further and further away from the dream of reaching their maiden football World Cup.

The team lost 1-0 to North Korea before a 2-0 defeat at the hands of Philippines left them rooted at the bottom.

Yemen are currently ranked 168th in the world and have not been able to play at home in three years.

Federation building and football fields have been damaged in the armed conflict against Yemen’s Houthi rebels, according to team officials, and the national league has been suspended since January 2010.

Finding a neutral venue for the qualifiers was easy. Getting to it was not.

The airport in capital Sanaa had been struck a number of times by air strikes so getting a flight out to Doha for the qualifiers was not possible.

Travelling by road was deemed too risky given the airstrikes.

But the players were adamant they wanted to play the qualifiers instead of forfeiting.

The only way out was through the sea. It took six days for all the players to convene. This was followed by a a 13-hour boat ride through treacherous stretch of water in order to reach Djibouti.

From there, the team flew into Doha for the twin qualifiers.

But the team’s lack of practice and gelling opportunities made it a mountain too high to climb for the players and they were left ruing what could have been.

“The league in Yemen has stopped and nobody’s playing any official games,” Miroslav Soukup, the team’s coach, told Al Jazeera in Doha.

“Nobody can train either because many stadiums are destroyed. The players are forced to stay at home and wait for the training camps.”

League clubs rely on donors to survive due to declining support. All national team players – except three – are based in Yemen.

According to team officials, “99 percent of football infrastructure has been destroyed” in Yemen. The targets, apart from the federation building, are the centre of the football fields, ensuring that it is “the sport that is damaged”.

There are no training camps taking place in Yemen. The effects are visible every time the team takes the field.

“It was very hard to even gather the players for this trip,” Amin Alsunini,  one of the team coaches, told Al Jazeera.

“The travel from Yemen to Qatar was so difficult as well. Everything affected us so badly. But when I see the players on the field, it shows how much they want to play. We didn’t win the games but the performance was good for us.”

Unable to play in front of the home crowd has taken a toll on the team as well.

Acclimatising to conditions at neutral venues has not been difficult for Yemen but it has put them on the same level playing field as the opposition.

“We’ve suffered a lot from the war that is currently going on,” Ala Mohammed Al-Sasi, the team captain, said.

“Playing on your own grounds and in front of your supporters gives you motivation to progress further. But all we can do now is keep our heads up and hope we get a chance to play at home again.”

The World Health Organisation has put the civilian death toll in Yemen since March 19, at over 1,080. The UN-sponsored negotiations on the crisis started in Geneva, with the aim of ending the bloody conflict in the country, are on the verge of a collapse.

The players and officials have families back home. Stepping onto the football field to help Yemen achieve their goals is often overshadowed by the thought of bombs dropping near their homes.

Two players could not even make it to Doha for the qualifiers.

For the ones that did, “the thoughts are with the families and friends” but in order to achieve their dreams, the players have to “throw everything outside and to be fully concentrated on what happens on the field”.

“It reflects the determination of our players and their love for Yemen because they are playing for their families and under their country’s name,” added coach Alsunini.

“Our people deserve to live in peace. We’ve suffered a lot and it’s time to stop all that is happening in Yemen.”

The team is preparing to go back to Yemen after the short stay in Qatar.

Their route back home will not be as thrilling and dangerous as the inward journey – the team is planning to fly to Jordan’s capital, Amman, from Doha and, resting on the hopes of a ceasefire following the Geneva talks, take a flight to Sanaa.

None of those plans are confirmed yet.

Even after they get home, they do not know when they will see each other again. 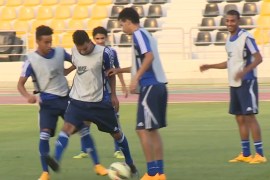 The national team has been unable to play at home for three years and is now in Doha for their World Cup qualifiers.