Duncan Keith and Patrick Kane gave Chicago all the offence they needed as the Blackhawks shut out the Tampa Bay Lightning 2-0 to win their third Stanley Cup in six years.

Keith banged in his own rebound late in the second period, giving goalie Corey Crawford all he would need for the win, and spoiling a fabulous effort by Tampa Bay goalie Ben Bishop, who turned aside 30 Chicago shots.

A workhorse in a series where the scoring stars were largely held in check, Keith was awarded the Conn Smythe Trophy as the most valuable player during the playoffs.

Kane salted the win with just over five minutes left, taking a no-look pass from Brandon Saad to put Chicago up by a pair, and marking the first time in the razor-tight series that either team has held a two-goal lead.

“There were a few games that could have gone either way, and we found a way,” Keith said in an on-ice interview.

Following Cup victories in 2010 and 2013, the win puts this edition of the Blackhawks into the rarified air of past great teams, particularly coming in an era of a salary cap and frequent player movement.

The celebration was made more special by it being the first since 1938 that the Blackhawks had clinched in Chicago.

Chicago goalie Crawford, who despite team success rarely gets billing among the NHL’s top goalies, was steady throughout the series, and with the Game Six win tied Hall of Famer Tony Esposito for most playoff wins in franchise history with 45. 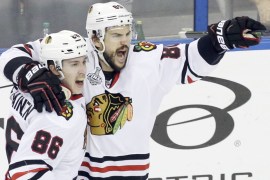 Vermette’s winning goal in the third period gives Chicago the lead in the Final over Tampa Bay. 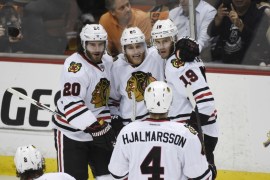 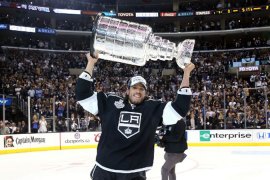