Lionel Messi scored two outstanding goals and set up Neymar to add another in injury time as Barcelona handed Bayern Munich and former coach Pep Guardiola a 3-0 defeat in the first leg of their Champions League semifinal.

Not even the coach who helped Messi become one of the best ever to play the game could find a way of stopping the prolific forward from scoring his 76th and record 77th goals in the competition on Wednesday.

Messi rifled a left-footed strike between Manuel Neuer and the post in the 77th, and three minutes later brought defender Jerome Boateng to the turf before chipping the goalkeeper.

Messi was in brilliant form from the start, and rounded off by providing the pass for Neymar to race away and score in stoppage time.

“Guardiola knows Messi, and he knows that if he is inspired nobody can stop him,” Barcelona defender Gerard Pique said. “He scored two spectacular goals.”

A day after Juventus beat Real Madrid 2-1 in the other first leg match, the scale of Barcelona’s victory now makes it a runaway favorite to reach the final – ahead of the return leg against Bayern in Munich on Tuesday.

Guardiola said before the match that there was no way to defend Messi’s “magnitude of talent”.

And despite keeping him in check for well over an hour, Messi finally proved his former coach right.

After the match, long gone was the smiling Guardiola speaking freely of the good memories that came to him back at Camp Nou on Tuesday.

“It wasn’t only Messi. Barca is a very good team,” said a dour Guardiola. “The third goal is a shame because with 2-0 we still had options.

“I congratulate Barcelona with all my heart and we will see each other next week in Munich.” 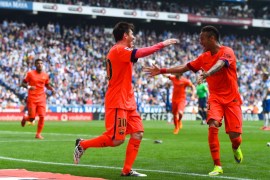 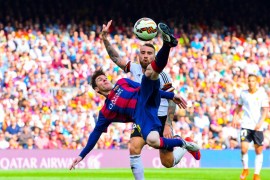 Messi scores his 400th goal for the club as Barcelona beat Valencia while Real Madrid maintain pursuit with win. 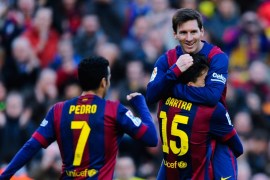