Many of the countries that voted for Sepp Blatter as he was elected as FIFA president were from Africa.

Al Jazeera’s Nicolas Haque reports from Dakar on why the FIFA president is so popular across the continent. 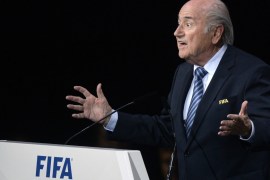 Sepp Blatter hits out at UEFA chief Platini and says he is shocked by the US corruption charges against FIFA officials.