Hamilton looked set to take his 37th career win after leading from the start, until the 17-year-old Verstappen rammed his Toro Rosso into the back of Romain Grosjean as he tried to overtake the Lotus driver.

That meant a safety car had to come out at the start of the 64th lap, and when Hamilton was then called in for a pit stop, he suddenly found himself behind both Rosberg and Ferrari’s Sebastian Vettel.

When the safety car finally went off track, Hamilton had only a few laps to try and get past Vettel and Rosberg on the most difficult track to overtake on F1.

It was Rosberg’s second win of the season following his victory two weeks ago at the Spanish GP, and he became the first driver since Ayrton Senna to win the Monaco race three straight times.

He is now right back in championship contention, but the circumstances of his win will likely infuriate Hamilton who was leading Rosberg by 15 seconds. 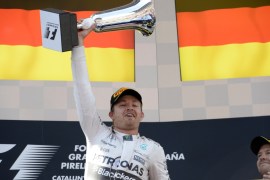 Mercedes one-two in Spain as Rosberg takes the chequered flag from pole ahead of teammate and championship leader.