Rory McIlroy won for the second time in three weeks and shattered the tournament record when he clinched a seven-stroke victory at the $7.1m Wells Fargo Championship.

McIlroy started the final round with a four-shot lead, and was never seriously challenged as he compiled a steady three-under-par 69 at Quail Hollow, where he notched his first PGA Tour victory five years ago.

The Northern Irishman finished at 21-under 267, a tournament record low score by five strokes, while Americans Webb Simpson (72) and Patrick Rodgers (68) tied for second on 14-under.

McIlroy’s margin of victory was only one shy of his record eight-shot wins at two major championships, the 2011 US Open and 2012 PGA Championship.

“The way I played yesterday really set me up to go out there today,” he said after securing his 11th PGA Tour victory, and his 18th professional triumph worldwide.

“I was in control of the tournament and I just needed to shoot a solid round and that was going to get me over the line.”

McIlroy, who turned 26 on May 4, becomes the first non-American to notch 11 wins on the PGA Tour before the age of 30, surpassing the 10 victories by South African Gary Player.

When he clinched the World Golf Championships-Match Play two weeks ago, he joined Tiger Woods (29) and Jack Nicklaus (17) as the only players in the last 75 years to win 10 events on the PGA Tour before their 26th birthday. 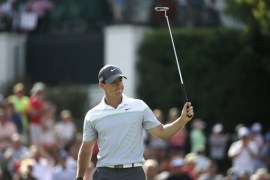 McIlroy takes lead after lowest round of his career

World number one shoots a course-record 11-under 61 at Wells Fargo, his lowest score as a professional. 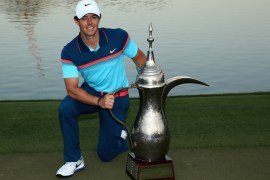 World number one Rory McIlroy wins the Dubai Desert Classic with a two-under 70 on the final day.