Defending champion Novak Djokovic scraped over his first hurdle at the Rome Masters with a 6-1, 6-7, 6-3 victory over Spanish claycourt specialist Nicolas Almagro.

The world number one, given a bye into the second round, was in total control as he swept through the opening set at the Foro Italico, but the aggressive Almagro settled down to his task and made the Serb work hard for an 18th consecutive Tour victory.

Meanwhile, in the women’s event Maria Sharapova wasted little energy as she moved into the third round.

The Russian, seeded three, was 6-2, 3-1 ahead when Australian opponent Jarmila Gajdosova retired. 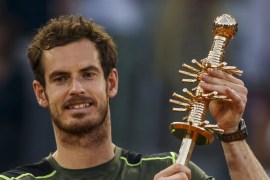