Nico Rosberg beat Mercedes teammate Lewis Hamilton for the first time this season and cut the Formula One world champion’s lead to 20 points with a commanding victory in the Spanish Grand Prix.

Hamilton, who had won three of the first four grands prix, had lost the battle for pole position and a slow getaway from the front row left the Briton playing catch-up all afternoon.

Hamilton tried his best, clawing back second place from Ferrari’s Sebastian Vettel, but Rosberg remained well out of reach and took the chequered flag 17.5 seconds clear of his title rival.

“This is a fantastic weekend. Everything worked out on Saturday and Sunday, it all came together,” Rosberg told reporters of the ninth win of his Formula One career and third Mercedes one-two of the season.

“That still we are dominating in such a way is fantastic to see,” he added.

He agreed that it had been a simple case of damage limitation.

“I had quite a poor start, it’s been quite a time since I had such a bad start,” he added. 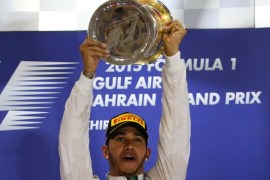 Hamilton makes it three wins out of four