World number one Novak Djokovic recovered from another slow start to beat Spain’s David Ferrer 7-5 7-5 and move into the last-four of the Miami Open, where he will face big-hitting American John Isner.

Djokovic trailed 4-1 in the first set but then started playing with more controlled aggression and won six of the next seven games to take the set.

The Serb opened up a 3-1 lead in the second but Ferrer, playing on his 33rd birthday, stuck to his task and broke Djokovic when he was serving for the match at 5-4.

However, the top seed broke straight back to give himself another chance to wrap up the contest, which this time he made sure of.

The six feet 10 inches (2.08 metres) tall Isner delighted home fans when he blasted his way to a 6-4 6-3 win over Japan’s fourth-seed Nishikori.

Isner never faced a break point during a dominant display where he held a 33-5 edge in winners and blasted 13 aces past his fourth-seeded opponent, including a rocket to close out the one-sided contest in a shockingly quick 70 minutes.

Serena in the final 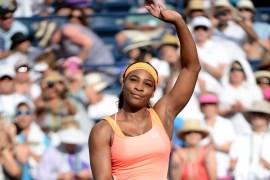 World number one seals 700th career win in reaching the Miami Masters semis; Murray through to last-four in men’s draw