Manny Pacquiao warned Floyd Mayweather he has been honing his killer instinct as he was welcomed to Las Vegas by a deafening horde of supporters.

A day after wrapping up his Los Angeles training camp, the Filipino superstar delighted hundreds of loyal fans at a rally in Sin City as the final countdown to his career-defining “Fight of Century” began.

Most bookmakers have made the unbeaten Mayweather the favorite for Saturday’s eagerly anticipated welterweight bout at the MGM Grand, the most lucrative in boxing history.

But Pacquiao told reporters he is reveling in his underdog status as he spoke excitedly about the prospect of finally stepping into the ring to face Mayweather.

“My confidence is different than for other fights. I am not nervous. I am excited,” Pacquiao said.

“I have something to prove. I like being the underdog because my killer instinct and my focus is there,” added Pacquiao, describing the bout as “one of the most important fights in my boxing legacy”.

“I want to make it a good result,” Pacquiao said. “My goal is to win.” 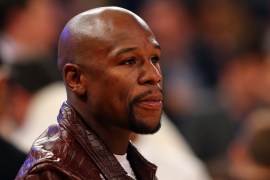