Manchester United’s top-four aspirations suffered a setback as Louis van Gaal’s side were blown away 3-0 by clinical Everton in the Premier League.

Meanwhile, Chelsea’s pursuit of the Premier League trophy will go into May after the runaway leaders drew 0-0 at Arsenal with a cautious, ultra-defensive display.

At Goodison Park, first-half goals from James McCarthy and John Stones put hosts Everton in control at Goodison Park and substitute Kevin Mirallas sealed victory on the counter-attack late on.

Fourth-placed United enjoyed plenty of possession but lacked any cutting edge with striker Radamel Falcao’s frustration complete when he had consolation goal disallowed for offside.

Defeat, following last week’s reverse against Chelsea, leaves United still a comfortable seven points above fifth-placed Liverpoool although that gap could be sliced to four if Liverpool win their game in hand at Hull City on Tuesday.

Everton completed their biggest win over United for 23 years in the 84th minute when Mirallas charged through from deep to finish cooly with United’s defence expecting an offside flag to be raised against Romelu Lukaku.

By protecting a 10-point lead over Manchester City and Arsenal, Chelsea can secure its first title in five years by beating Leicester on Wednesday and Crystal Palace next Sunday.

Chelsea was frustrated to have three penalty appeals rejected in the first half at the Emirates Stadium, two involving Oscar and then when Cesc Fabregas was booked for diving.

But Jose Mourinho seemed to send Chelsea with the target of avoiding losing. Injuries to top-scorer Diego Costa and Loic Remy meant no recognised striker featured in the starting lineup and Didier Drogba only came on at halftime when Oscar was forced off injured. 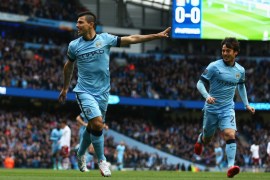 Man City back into second after late winner