Kraigg Brathwaite’s determined century led West Indies to 202 for two at the close of the fourth day of the second Test leaving the hosts with a lead of 37 runs.

There is still plenty of work to do for the hosts to save the Test but England will have taken little heart from a flat batting track that shows no signs of deteriorating.

A draw seems the most likely scenario on the final day, meaning the series would be decided in the third and final Test in Barbados.

With England having established a first innings lead of 165, largely thanks to Joe Root’s wonderful unbeaten 182, the pressure was on Brathwaite, especially after the early loss of his partner Devon Smith shortly before lunch.

But the Bajan, well supported by Darren Bravo (69) and then Marlon Samuels, took a firm grip on proceedings, making the most of a placid surface.

Brathwaite’s fourth Test century, his first against England, was a superb display of concentration against some tight, very straight bowling from England.

Earlier England started the day on 373 for six with Root on 118 but they quickly lost Buttler for 13.

Root took the attack to the West Indies bowlers, producing some fine aggressive strokes, but he eventually ran out of partners.

The first Test in the three-match series was drawn. 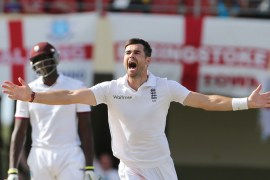