A federal judge gave final approval on Wednesday to a settlement in a lawsuit brought by about 5,000 former National Football League players who accused the league of covering up the dangers of concussions.

The settlement, approved by Judge Anita Brody, includes allowing for monetary awards of up to $5m per retired player for serious medical conditions associated with repeated head trauma and could cost the league $1bn over 65 years.

NFL general counsel Jeff Pash said the league, with $10bn in annual revenues, looked forward ‘to implementing the terms of the settlement and continuing to work with our players, coaches and medical staffs to enhance the safety’ of football.

But payments could be held up indefinitely if any player who is part of the settlement files an appeal. If there are no appeals, players could begin to see benefits from the settlement this summer.

The NFL is accused of covering up the dangers of concussions to keep players on the field.

The league and the players union estimate that 30% of former players will develop brain conditions like Alzheimer’s or a less debilitating form of dementia.

“This is clearly a tremendous moment for the NFL retired player community,” Christopher Seeger, co-lead counsel for the players, told a teleconference.

“With over 99% participation, it’s clear that the retired player community overwhelmingly supports this agreement and is eager to begin taking advantage of its benefits.”

In February, Brody, who sits on the U.S. District Court for the Eastern District of Pennsylvania, refused to accept a proposed $765 million settlement between the league and the retired players over concerns there was not enough money to cover the 65-year settlement.

Both sides reworked the deal, which is now uncapped. Among the other changes is a provision giving players credit for time they played in the NFL Europe. 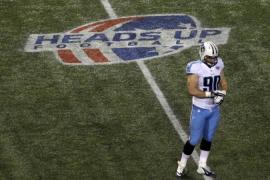 Federal judge in Philadelphia grants preliminary approval to a settlement between the NFL and former players.