England are fully focused on winning this month’s three-match series in West Indies and not on Kevin Pietersen’s chances of making a test return, coach Peter Moores said.

Incoming England and Wales Cricket Board (ECB) chairman Colin Graves has hinted at a Pietersen recall but Moores refused to be distracted by the issue.

“Kevin is not on this trip so I don’t need to focus on Kevin at all,” he told a news conference before the squad flew out to the Caribbean.

“My focus is to support Alastair (Cook). I always support the captain and work with those 16 players to try and make sure we put the best 11 out.”

Opening batsman Cook said Pietersen’s fate was in the hands of the ECB.

“Contrary to what a lot of you guys read in the media, I am a long way away from that decision-making,” said the England Test skipper.

“It is not down to us. We’ve got 16 guys going to West Indies who are desperate to start turning around English cricket from what’s happened over the last three months.”

Under new one-day skipper Eoin Morgan, England were woeful in the recent 50-over World Cup in Australia and New Zealand and were knocked out in the first round.

“We need to get back to winning ways,” said Cook. “In terms of a brand of cricket it’s about trying to win this series and that’s all these 16 guys and the support staff can focus on.

“Everything else, the ECB, the hierarchy, have to deal with that.” 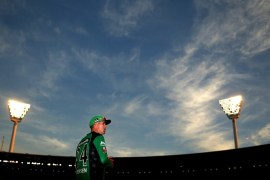 Wearing an England shirt again would be a privilege: KP

Kevin Pietersen reaches agreement with Sunrisers allowing him to miss the IPL league fixtures and play for Surrey. 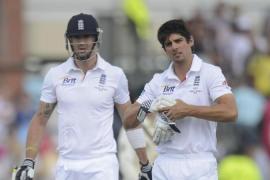 KP has ‘tarnished’ the successful era 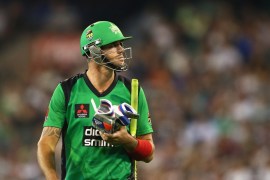 Pietersen does not warrant an England recall: Hussain

Former England captain wants the team to move on and look beyond KP despite a poor show in the World Cup.