Formula One world champion Lewis Hamilton stormed to his third successive pole position of the season, and third in a row in China, after edging teammate Nico Rosberg in a front-row lockout for Mercedes.

Hamilton, unbeaten in qualifying so far this year, lapped the 5.451 km Shanghai International Circuit in one minute 35.782 seconds to take his 41st career pole just 0.042 of a second clear of Rosberg.

Ferrari’s Sebastian Vettel, winner of the previous race in Malaysia, will start third.

Ferrari, who were helped by a bold strategy gamble and searing temperatures at Sepang, continued to lead the chasing pack but were unable to match Mercedes’ formidable one-lap pace in the cooler conditions.

Vettel’s best time was nearly a second off Hamilton’s benchmark.

Brazilian Felipe Massa and Finland’s Valtteri Bottas, seeking to re-establish their Williams team as Mercedes’ closest challengers, were fourth and fifth ahead of Kimi Raikkonen’s Ferrari in sixth.

Former champions Red Bull, who had looked the third-best team after final practice, dropped back with Australian Daniel Ricciardo only seventh. 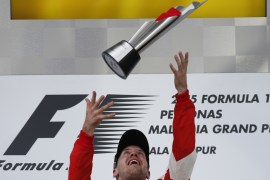 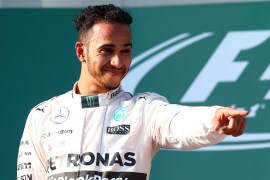