FIFA President Sepp Blatter has urged Iran to end the ban on women watching football in stadiums, describing the situation as “intolerable”.

In comments published on Friday in FIFA’s weekly magazine ahead of International Women’s Day, Blatter said that despite his efforts to convince Iranian President Hassan Rouhani to let women attend matches when he met him in 2013, “nothing has happened”.

“I raised the topic at my meeting with President of Iran Hassan Rouhani, and came away with the impression that this intolerable situation could change over the medium term,” Blatter wrote in the letter titled “An appeal to Iran.”

“However, nothing has happened. A collective stadium ban still applies to women in Iran, despite the existence of a thriving women’s football organisation.

“This cannot continue. Hence, my appeal to the Iranian authorities; open the nation’s football stadiums to women.”

Iran is one of the few countries that block women from attending matches but has permitted female fans at some other sports venues in the past.

In 2006, then-president Mahmoud Ahmadinejad said women could attend matches in a special section of stadiums, but the decision was overruled by higher authorities. A year later, Iranian filmmaker Jafar Panahi showed girls who dressed as men to sneak into football matches in Tehran.

Iran is bidding against the United Arab Emirates to host the 2019 Asian Cup and the ban on women is expected to damage their chances of being awarded the tournament.

At the Asian Cup earlier this year in Australia, Iranian players were reportedly threatened with punishment back home if they were to take selfies with female fans attending their games after pictures emerged on social media. Iranian female fans also showed up in numbers at stadiums during the tournament.

Blatter said the ban “cannot continue” and renewed his plea to the Iranian authorities.

“Even in territories where women are all but invisible for cultural reasons, football can instill a sense of purpose and self-worth that is too often denied them in their everyday lives,” Blatter said in his letter, later adding “our sport plays a crucial role in efforts to promote integration and equality for women”.

Blatter, who also attended the first women’s football and leadership conference on Friday in Zurich, said the development of the women’s game was a key element of his programme.

“It’s a game for everyone, no matter who you are, no matter where you are from,” he said. “What is important is that we must have leagues in the different associations, and not only national teams.”

Blatter also praised the International Football Association Board’s decision last year to allow the wearing of veils and turbans during matches, a move that was facilitated by the organisation of the 2016 women’s under-17 World Cup in Jordan.

“This opened the door to football for millions of girls and women. Especially in the Arab world …. our sport plays a crucial role in efforts to promote integration and equality for women,” Blatter said. “However, a willingness to reappraise the situation is not equally evident everywhere.” 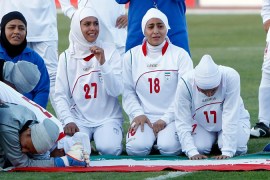 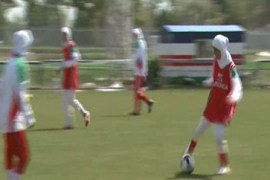