MotoGP great Valentino Rossi rolled back the years to win the Qatar season-opener for Yamaha with Italian riders sweeping the podium places after a thrilling duel under the Losail floodlights.

Andrea Dovizioso, who had started on pole position while Rossi was only eighth, took second place just 0.174 seconds behind for Ducati with team mate Andrea Iannone finishing third.

I said this a lot of times, but for me this is one of the best

Honda’s double world champion Marc Marquez was fifth after being forced out at the first corner and having to fight back from last.

The win, at the grand old age of 36, was the 109th of Rossi’s grand prix career and 83rd in the top category of motorcycling.

“I said this a lot of times, but for me this is one of the best,” said Rossi, a nine-time world champion, after a race that saw the lead constantly change hands with the outcome uncertain right to the end.

Rossi seemed content to hang back in fourth but moved up to third at the halfway point and then used all his experience to attack, taking the lead for the first time with four laps remaining.

“A sensational comeback from eighth place at the beginning…he did incredibly well.”

Marquez, winner in Qatar last year, was forced wide into the first corner and despite a thrilling comeback could make little inroads on the top four. 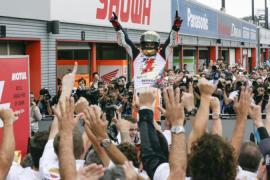 Gritty Spaniard seals his fourth global title in five years after a fighting second-place finish in the Japanese GP. 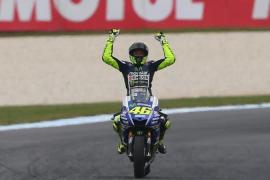