A struggling and edgy Rafa Nadal crashed out of the Miami Open in the third round, losing 6-4, 2-6, 6-3 to fellow Spaniard Fernando Verdasco.

The 31-year-old Verdasco, who is ranked 34th in the world, has now won his last two matches against world number three Nadal, after the 14-time grand slam winner had won their previous 13 meetings.

I am playing with too much nerves for a lot of moments, in important moments, playing a little bit of anxious in those moments

Nadal has never won the title in Miami, with his 11 attempts his longest streak of attempts at a tournament without a victory and he said he was concerned that he was nervous when playing.

“I am playing with too much nerves for a lot of moments, in important moments, playing a little bit of anxious in those moments,” he said.

“I have been able to control my emotions during, let’s say, 90-95 percent of the matches in my career, today it was tougher to be under self control.

Britain’s Andy Murray, meanwhile, moved into the last-16 after beating Colombia’s Santiago Giraldo 6-3, 6-4 to clinch his 499th win on the ATP Tour.

Murray would become just the ninth active player and only the 46th man in the Open era to achieve the 500-win milestone should he defeat South African Kevin Anderson in the next round at Key Biscayne.

Williams, a seven-times winner at Miami, lost just eight points in the 12 games she won, with Californian Bellis holding serve just once in each set.

Williams will face Svetlana Kuznetsova in the fourth round after the Russian upset 13th seed Angelique Kerber of Germany 6-3, 3-6, 6-3.

Romanian Halep, fresh from her title win at Indian Wells last week, beat Italy’s Camila Giori 6-4, 7-5 to make the last-16 at Miami for the first time.

The third-seed will face Italy’s Pennetta who defeated two-time Miami winner Victoria Azarenka 7-6, 7-6. Pennetta has won all three of their previous meetings. 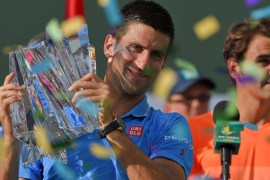 World number one wins 50th ATP Tour event as he retains the Indian Wells title with a three-set win.