New Zealand opener Martin Guptill sent the ball soaring and the records tumbling by striking a cricket World Cup record of 237 not out to set up his team’s crushing 143-run victory over West Indies in the final quarter-final.

Their reward was a seventh World Cup semi-final appearance, this time against South Africa in Auckland on Tuesday, and another opportunity to reach a final for the first time.

After captain Brendon McCullum had opted to bat on a sunny afternoon at the Wellington Regional Stadium Guptill struck the ball cleanly from the outset.

He became the first New Zealander to score consecutive World Cup centuries, bettered his own national record of 189 not out then overtook Chris Gayle’s World Cup record of 215 set against Zimbabwe at the current tournament. His innings took 163 balls and included 24 boundaries and 11 sixes.

In reply, Gayle, who had been in doubt for the match because of a painful back complaint, set off as if he were determined to reclaim his record after Trent Boult had bowled Jonathan Charles for three with his second ball.

He swung Southee for a six and four to leg before turning his attention to the customarily frugal Daniel Vettori whose economy rate took a battering when Gayle heaved three consecutive sixes over mid-wicket.

Boult continued to take wickets at the other end and Vettori took a stunning catch on the third-man boundary, leaping high to haul down the ball with his left hand to dismiss Marlon Samuels (27).

Gayle, now in obvious pain, was on borrowed time and the fun ended when fast bowler Adam Milne, returning to the side after missing the final group match against Bangladesh through a shoulder injury, dismissed the left-hander for 61 with eight sixes. 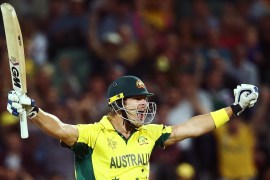