Big-serving Milos Raonic fought back from a set down and saved three match points to upset Rafa Nadal 4-6 7-6, 7-5 in a pulsating quarter-final at the BNP Paribas Open.

Meanwhile, Serena Williams withdrew before the start of her semi-final due to a knee problem, cutting short her return to the event following a 14-year boycott.

Raonic, the 24-year-old Canadian, earned his first win over Nadal in six meetings that earned him a place in Saturday’s semi-finals where he will face Roger Federer, who cruised through the last-eight with a ruthless 6-4 6-0 demolition of Czech Tomas Berdych.

World number one Novak Djokovic will face fourth-seeded Scot Andy Murray in Saturday’s other semi in a re-match of this year’s Australian Open final, won by the Serb in four sets.

Williams, who has been absent from Indian Wells since winning the event in 2001 when she says she suffered racist abuse from fans, said she would not be able to give her all for the remainder of the tournament and decided to pull out.

The decision put her opponent, Simona Halep, into the final against Jelena Jankovic, who beat Sabine Lisicki in three sets.

“I was on the practice court yesterday and everything was going well, but literally the last two minutes I went for a serve and felt a super sharp pain in my knee,” Williams said in a news conference.

“I even did an injection. I’ve never done an injection before. If this were any other event I probably wouldn’t have considered it. But I wanted to give 200 percent. It just wasn’t meant to be this year.”

In the other semi-final, Lisicki, who endured a three-set quarter-final nailbiter on Thursday, took the first set 6-3 before Jankovic stormed back., the Serb taking the remaining sets 6-3 6-1. 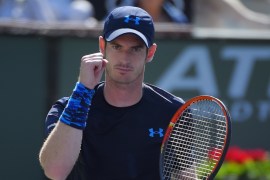 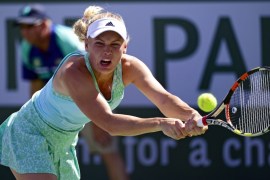 Wozniacki knocked out of Indian Wells