Lewis Hamilton’s world championship defence got off to a flying start with a crushing victory for Mercedes in the season-opening Australian Grand Prix as Formula One rivals succumbed to a farcical rash of reliability problems.

Pole-sitter Hamilton started from a grid reduced to 15 cars from a possible 20 and cruised to his 34th race win with a 1.3-second gap to runner-up teammate Nico Rosberg.

With Mercedes enjoying a Sunday stroll, Sebastian Vettel finished third – 34 seconds behind Hamilton – on his Ferrari debut after winning a battle for the podium with Williams driver Felipe Massa.

Ferrari’s cheer was tempered, however, by two botched tyre changes for Kimi Raikkonen, the second forcing the Finn to retire when fifth late in the race due to his left rear wheel not being properly attached.

Interviewed on the podium by Arnold Schwarzenegger, the Hollywood ‘Terminator’, Hamilton said it was great to be back on top.

“It is an incredible feeling to continue winning,” he said.

Max Verstappen’s record-setting turn as the youngest ever F1 driver ended on a sour note when the Dutch 17-year-old rolled to a stop near the pit entry after complaining of smoke in the cockpit of his Toro Rosso.

Only 11 cars finished, with both Lotus drivers out before the end of the first lap on an embarrassing day for a series that prides itself on being the pinnacle of motorsport. 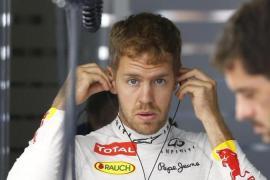 Four-time Formula One world champion is set to join Ferrari next season, according to his current team. 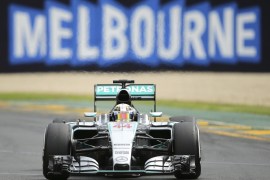 Hamilton on pole for season-opening GP

Formula One world champion edges out Mercedes teammate Rosberg for his record fourth pole in Australia.