Briton Mark Cavendish won the Dubai Tour after sprinting to victory in the fourth and final stage on Saturday.

The Etixx-Quick-Step rider began the day four seconds adrift of leader John Degenkolb but claimed 10 bonus seconds as he raced to win the stage, which finished at the world’s tallest building, the Burj Khalifa.

Cavendish, who has won 25 Tour de France stages, finished in 15 hours 22 minutes and 38 seconds, six seconds ahead of Germany’s Degenkolb, who rides for Team Giant – Alpecin, and 10 in front of Movistar’s Juan Jose Lobato.

The 29-year-old Isle of Man rider, who won the first stage in Dubai on Wednesday, savoured the victory after a tough 2014 season in which he was hampered by a shoulder injury sustained when he crashed out on the first stage of the Tour de France.

“I’m over the moon,” Cavendish told reporters. “I had a bit of fire in my belly to get there today. I’m super-happy with how the lads rode all week, and to win here, it’s pretty special.

“It wasn’t just a pan-flat sprinters’ race. We really had to work. I’m glad we could get the win.” 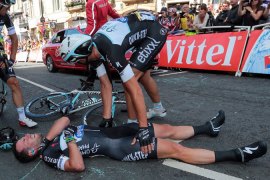 Britain’s Mark Cavendish misses the rest of the Tour de France after dislocating his shoulder on the first stage.