Pakistan chief selector Moin Khan was ordered to return home immediately on Tuesday and explain his visit to a casino before the team’s 150-run loss against the West Indies in the Cricket World Cup.

Moin went to the casino in Christchurch, New Zealand, two days before the defeat last Saturday.

“There are widespread allegations into the conduct of the chief selector having brought the image of Pakistan and PCB into disrepute,” the Pakistan Cricket Board said in a statement on Tuesday.

PCB chairman Shaharyar Khan spoke with the chief selector and other members of team management by telephone on Tuesday, before ordering Moin to return home.

“He’s (Moin) been recalled immediately so that he can explain his position himself, and by which time we will also have a full picture,” Shaharyar said in Lahore.

Shaharyar said Moin acknowledged he went to the casino with his wife, and had dinner with their friend.

“When I told Moin there are lots of allegations against you, and even members of the Upper House discussed it in parliament today, he told me that all the accusations are wrong,” Shaharyar said.

“He was also disappointed to go to the casino, but he told me he went there to have dinner, and didn’t do anything else.”

Manager Naveed Akram Cheema will take over as chief selector of the tour selection committee, including coach Waqar Younis and captain Misbah-ul-Haq.

Pakistan has lost its two pool games against India and the West Indies, and next plays on Sunday against Zimbabwe. 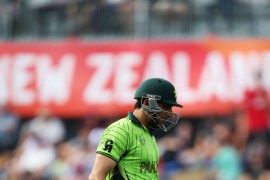