Defending champion Roger Federer had little trouble bypassing Mikhail Youzhny 6-3, 6-1 in the first round at the Dubai Tennis Championships on Monday.

Federer was playing his first match since his third round exit to Andreas Seppi at the Australian Open last month.

The 33-year-old Federer, needed just 56 minutes to get through to the second round, and remains undefeated in 16 matches against Youzhny.

The 55th-ranked Youhzny, who has been a finalist in Dubai twice, stayed level with Federer through the first six games of the match. Federer took control of the match when he broke serve on a fourth break point in the seventh game of the first set when Youzhny hit a backhand long.

Meanwhile, fifth-seeded Ernests Gulbis extended his winless streak this year to five following his defeat to Denis Istomin 7-5, 6-2 in the first round.

“I’m not in good form right now,” Gulbis said. “I’m not feeling my shots at all. I have no timing. In practice I have been playing worse than in the match.” 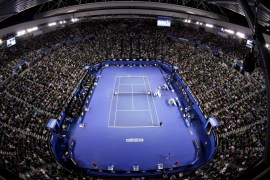 The fall of Australian tennis

Australia was a dominant figure in tennis but participation figures have declined and tennis courts disappeared.