Guard Russell Westbrook had 26 points and nine assists and rookie Mitch McGary had 17 points and 10 rebounds for Oklahoma City, which has won four of five.

Elsewhere, guard Marco Belinelli’s jumper from the left baseline with 2.1 seconds remaining capped a furious fourth-quarter rally that swept San Antonio to a 95-93 victory over Indiana. 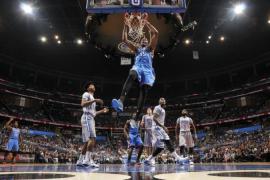 Kevin Durant scores 21 points, 11 rebounds and eight assists in just 27 minutes as Orlando Magic are beaten in the NBA. 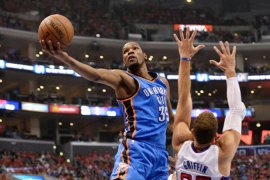