Real Madrid could be thrown out of the King’s Cup for playing an ineligible player in their 3-1 victory over Cadiz after Barcelona routed lower league Villanovense 6-1 to reach the last 16.

Real’s Denis Cheryshev received a third yellow card playing for Villarreal in the semi-finals last season but has not served the resulting ban, and the Madrid club are likely to be thrown out of the competition, Spanish media reported.

Cheryshev scored the opening goal on Wednesday before being substituted at half time, and Isco struck twice for Real against the third-tier side, who pulled a late goal back through Enrique Marquez.

The potential disqualification heaps more pressure on Real Madrid, who lost 4-0 at home to arch-rivals Barca in La Liga last month and are six points behind them in the standings after 13 games.

“It is a complicated situation. Nobody at the club knew about the suspension,” Real director Emilio Butragueno told reporters.

“Nobody at the club was informed by the federation. We received nothing from Villarreal and Cheryshev didn’t know about the ban.”

Elsewhere, youngster Sandro Ramirez hit a hat-trick and Munir El-Haddadi struck twice for a Barcelona’s second-string side who tore apart lower-league Villanovense 6-1 to book the holders a place in the last 16.

With big names including Lionel Messi, Neymar and Luis Suarez rested, it was a chance for Barca’s lesser lights to shine after a goalless first leg, and Sandro and Munir took full advantage with deadly performances.

It was always going to be a tough task for third-tier Villanovense but keeper Jose Fuentes could have done better with Dani Alves’s opener after four minutes, and he gave the ball straight to Sandro who scored.

Juanfran Guarnido pulled a goal back after 29 minutes but two minutes later Sandro pounced again. Barca piled on the misery after the break, with Munir scoring twice and Sandro getting another in between.

The tie was brought forward due to Barca’s involvement in the Club World Cup this month, and the other first-leg matches take place this week. 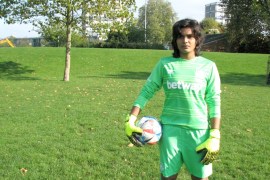 India’s female footballer fights for recognition and a visa that allows her to follow her dreams. 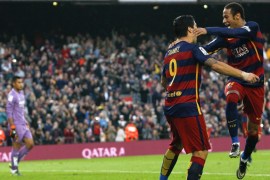