British world heavyweight champion Tyson Fury has been named the subject of a police investigation after making comments about homosexuality.

Greater Manchester Police said on Wednesday that they have received a report of a “hate crime” regarding Fury’s comments, which were published in a newspaper interview before his victory over Wladimir Klitschko in November.

Fury has also been stripped of his IBF title, one of three he won by beating Klitschko, after agreeing to a contracted rematch with the Ukrainian instead of fighting the IBF’s mandatory challenger, the Ukrainian boxer, Vyacheslav Glazkov .

The boxer, who is fiercely religious, said that among the things that need to happen “before the devil comes home … homosexuality being legal in countries”.

Before the Klitschko fight, Fury also ranted about abortion, and said that doping should be legalised in all sports to make it “fully fair”.

He was fined about $4,500 in 2012 for a foul-mouthed rant that included branding two fellow English boxers “gay lovers”.

IN PICTURES: Fury stuns Klitschko to be crowned heavyweight champion

In the ring, Fury beat Klitschko, who had reigned as world champion for 11 years, on points in November to take his unbeaten record to 25 professional fights.

“Our challenger was Vyacheslav Glazkov, but instead Fury’s gone and signed a rematch clause with Wladimir Klitschko.”

The contract for last month’s title fight in Dusseldorf included a rematch clause, which 39-year-old Klitschko said last week he had decided to exercise.

A date and venue have yet to be confirmed.

The win earned Fury three versions of the heavyweight crown – the WBA, WBO and IBF – with American Deontay Wilder holding the WBC belt. 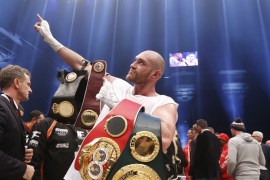 Britain’s Fury causes boxing upset as he brings an end to Klitschko’s nine-and-half-year reign with a points victory. 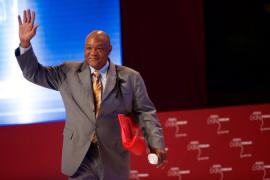 ‘I was always afraid in the ring’

Former heavyweight world champion Foreman talks courage, fear, money and the man he could not beat.