A delightful flick and volley from Neymar allowed him to complete a double in Barcelona’s emphatic victory before Sevilla battled back from behind to hand Rafael Benitez his first league defeat as Real Madrid manager.

Real had gone ahead through a spectacular overhead kick from Sergio Ramos after 22 minutes but Ciro Immobile fired home minutes before halftime and a well-worked move was finished off by Ever Banega to put Sevilla ahead after 61 minutes.

Benitez’s side raised their game but Fernando Llorente scored again with a header from a counter-attack after 75 minutes and substitute James Rodriguez’s injury time goal was too little too late for Real, who suffered defeat at Sevilla just as Barcelona had last month.

“It is a difficult stadium to play in and I think we were a bit static against a strong side. You win leagues by going step by step and these are important points we have dropped,” Ramos told reporters.

Meanwhile, the in-form Brazilian Neymar, who now leads the La Liga scoring charts with 11 goals, opened the scoring for Barcelona with a clinical finish, having been set up by a defence-splitting pass from Sergio Busquets after 60 minutes.

Neymar and Luis Suarez have come to the fore in the absence of injured talisman Lionel Messi and Suarez converted a penalty after 70 minutes following a foul by Jaume Costa on Munir El Haddadi.

The two combined again, with Suarez finding Neymar who lifted the ball round Costa and knocked it home after 85 minutes.

The pair now have 16 goals between them from the last six games.

Barca lead the table with 27 points from 11 games, three more than Real while Atletico are on 23 points. 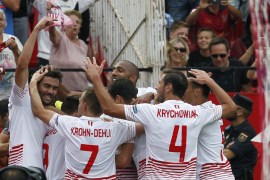