Kansas City ended a 30-year wait for a World Series title as the Royals reigned over Major League Baseball with a 7-2, 12-inning victory over the New York Mets.

A pinch-hit single by utility infielder Christian Colon scored the go-ahead run off reliever Addison Reed in the 12th and the Royals added four more runs in the inning as they captured the best-of-seven series 4-1.

The visitors swarmed into the middle of the diamond in the hushed Citi Field stadium for a celebration by the mound where closer Wade Davis had struck out the side to end it.

Catcher Salvador Perez was named Most Valuable Player of the Series after batting .364 with two RBIs, three runs scored and a .391 on-base average, and expertly handling a pitching staff that more than held their own against the vaunted Mets hurlers.

“It is unbelievable we feel like a family here and we knew we were going to do something special this year, I felt it in spring training,” Perez said. “Now I don’t feel pain, I don’t feel nothing. I am ready to celebrate.”

The Royals’ triumph was all the sweeter coming after their agonizing Game Seven loss in last year’s World Series to the San Francisco Giants and a large contingent of blue-shirted Royals supporters crowded around their dugout to share in the joy. 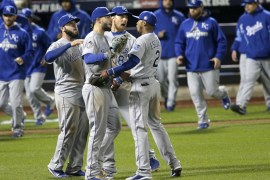 Royals one win away from World Series crown

New York Mets beaten 5-3 in the fourth game as Kansas City edge closer to their first title in 30 years. 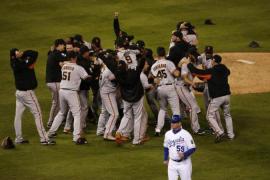 Madison Bumgarner stars in the 3-2 win in Game Seven that sealed the Giants’ third crown in five years.