Both Blatter and Platini, a candidate for the February 26 FIFA presidential election, were suspended in October, engulfed by a deepening corruption scandal as the sport faces criminal investigations in Switzerland and the United States.

“The FIFA Appeal Committee has today rejected in full the appeals lodged by Joseph S. Blatter and Michel Platini,” FIFA said in a statement on Wednesday.

The decision is a further blow to Frenchman Platini’s hopes of standing because FIFA’s electoral committee has said his registration will not be processed while he is suspended.

He is not allowed to campaign or engage in any football-related activities until his 90-day suspension is lifted.

The only hope for Platini, who was banned with Blatter on October 8 pending a full ethics committee investigation into their conduct, is to take his case to the Court of Arbitration for Sport (CAS).

Following the announcement, Platini said through his lawyers that he would now appeal to CAS.

If he wins that appeal, the electoral committee has said it will review his case but, even then, there is still no guarantee that he would be able to stand in the election.

The ethics committee has also handed out a 90-day suspension to Jerome Valcke, FIFA secretary-general, who had already been put on leave by the football body.

FIFA’s Ethics Committee has said it hopes to have completed the full investigation into Blatter and Platini in time for a final decision to be made on their cases by the end of their 90-day suspension period.

Both men could then face much longer bans if found guilty of contravening FIFA’s code of ethics which, in Platini’s case, would mean he also loses his position as UEFA president.

Buffeted by a series of scandals over the past few years, FIFA was thrown into turmoil in May by the US indictments of 14 football officials, including two FIFA vice presidents, and sports marketing executives for alleged corruption. 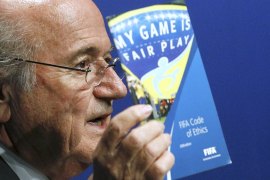