India’s Ravindra Jadeja and Ravichandran Ashwin thrived on a spinners’ paradise in Mohali, bamboozling South Africa’s batsmen in the first Test to secure a 108-run victory with more than two days to spare.

Eighteen wickets tumbled on an extraordinary third day as South Africa wobbled in pursuit of a 218-run victory target before being shot out for just 109 as India took a 1-0 lead in the four-match series.

Jadeja took five second-innings wickets and his match haul of eight along with the 38 crucial runs he contributed to India’s first-innings earned him the man-of-the-match award.

It was a modest target for a South African batting order containing two of the world’s top four Test batsmen in Hashim Amla and AB de Villiers but India skipper Virat Kohli had not been too worried.

“I was pretty confident of our bowlers,” Kohli said at the presentation ceremony.

“They have quality batsmen in their side, but we thought that if we are finding it difficult [to score] on this wicket, obviously it’s going to be tough for the opposition as well.”

The Proteas sprang a surprise by sending in paceman Vernon Philander to open the innings, a ploy that failed when Jadeja trapped the batsman lbw for one.

Left-arm spinner Jadeja returned to deal a bigger blow when he castled Amla, the South Africa captain offering no shot to a ball that crashed on to his middle stump.

Leg-spinner Amit Mishra drove home the advantage by bowling De Villiers for the second time in the test, a flighted delivery sneaking through the South African talisman’s defence.

Stiaan van Zyl (36) offered resistance, but it was too little in the face of aggressive spin bowling by Jadeja and Ashwin, who also finished with eight wickets in the match. 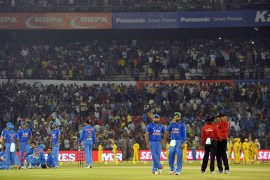