New Zealand cemented their status as the greatest team in rugby history when they overwhelmed Australia 34-17 at Twickenham to become world champions for a record third time, and the first nation to retain the Webb Ellis Cup.

Tries from Nehe Milner-Skudder and Ma’a Nonu had the All Blacks cruising 21-3 early in the second half before Ben Smith’s yellow card opened the door for Australia, who got back to within four points with tries by David Pocock and Tuvita Kuridrani.

But flyhalf Dan Carter, who missed most of the 2011 tournament through injury and who is retiring from international rugby after Saturday’s match, stepped up with an exquisite drop goal and a 50-metre penalty to put the result beyond doubt.

New Zealand have lost just three times in 54 matches since their triumph on home soil four years ago, and have won every World Cup match since losing to France in the 2007 quarter-finals.

“I’m pretty grateful to be where I am considering what happened four years ago,” said man-of-the-match Carter, who was also part of the unsuccessful 2003 and 2007 campaigns.

“I’m so proud of the team. To win back-to-back World Cups is a dream come true. It’s a pretty strong group of guys. We try to do things no other team has done before… it’s a special feeling to be part of such a great team.”

The previous six World Cup finals had produced seven tries between them and Saturday’s total of five was a record, eclipsing the four of the inaugural final when New Zealand beat France.

The sport’s superpower won the cup for a second time four years ago, also on home soil, and Saturday’s victory was their first overseas. 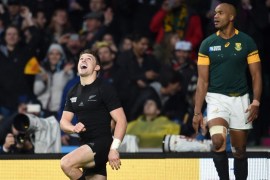