The winning duo dropped serve three times and had to fight back from a 2-0 deficit in the second set, but the top-seeds Hingis and Mirza won 6-2, 6-3.

The Swiss-Indian pairing have seven WTA doubles titles this year and have won their last three tournaments in a row – the US Open, Guangzhou and Wuhan – and 13 straight matches.

Meanwhile, Venus Williams won the singles title when her Spanish opponent and fifth-seeded Garbine Muguruza retired with a left ankle injury while trailing 6-3, 3-0.

It was the unseeded Williams’ 47th WTA singles title.

“Well, this is a sad day today,” said Muguruza.

“I’m very sorry I had to retire today, but I had a really amazing week here in Wuhan. Also, I really want to congratulate Venus. She’s always such a tough player and she had an amazing week, as well. For sure we’ll play again soon, and it’s going to be a tough match, of course.”

Williams had to rally from 5-3 down in the third set of the quarterfinals to beat British qualifier Johanna Konta, and she saved a match point during a 5-7, 6-2, 7-6 (4) semifinal win over Roberta Vinci.

“I probably didn’t have a lot of chances if you were feeling well,” Williams told Muguruza.

“I know you had a tough match yesterday – it’s not easy when you don’t play your best.”

The eighth-ranked Muguruza will move to a career-high fifth in the rankings on Monday and is close to a qualifying position in this month’s WTA season finals in Singapore. Had she won the title, Muruguza would have reached fourth in the world and assured herself a qualifying spot.

Williams had not played in an elite Premier-level final for five years since winning Dubai in 2010; the former number one will jump 10 spots to 14th on the computer. 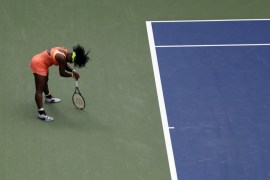 ‘Injured’ Serena calls it quit on the season

World number one will miss the China Open and the season-ending WTA Finals.