Sepp Blatter has claimed there was a deal to give Russia the 2018 World Cup before voting took place, and blamed “bad losers” England and the US for the corruption scandal engulfing the organisation.

“In 2010, we [FIFA’s 22-strong executive committee] had taken a double decision, we were agreed to go to Russia [in 2018], then in 2022 we’d return to the United States,” the outgoing FIFA president told Russian news agency TASS on Wednesday.

If the US had won the right to host the 2022 World Cup, “all we’d be talking about now would be the marvellous 2018 World Cup in Russia and not about any problem at FIFA,” he said.

Blatter’s comments prompted the head of the English Football Association (FA) Greg Dyke to say he would look into recouping around $32.2m spent on England’s failed 2018 bid.

Hitting back in an interview with Al Jazeera, Qatar’s Foreign Minister Khalid bin Mohammad al-Attiyah responded: “I want to see his face when we host the 2022.”

Attiyah also said that workers’ rights “were improving” in Qatar, responding to sustained criticism of the nation’s treatment of labourers who are building the infrastructe and stadiums in the Gulf nation .(The full interview will be aired at 19:30 GMT on Friday).

In further revelations, Blatter hit out at UEFA president Michel Platini and former French president Nicolas Sarkozy, saying they skewered the 2022 plan by cosying up to eventual hosts Qatar.

Everything changed, he added, “after talks between Sarkozy and Qatar’s prince [Sheikh Tamim bin Hamad bin Khalifa Al Thani] who is now running the emirate” – a meeting followed by lunch between the two men and Platini.

As a result of that Franco-Qatari summit, at FIFA’s secret ballot in December 2010 “four European votes deserted the United States and the result was 14-8 [to Qatar]”, he said.

In the interview published on Thursday he blasted his suspension and the negative effect on his chances, and was adamant he would be cleared. 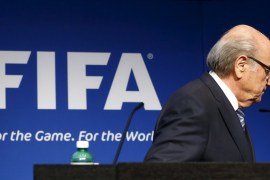 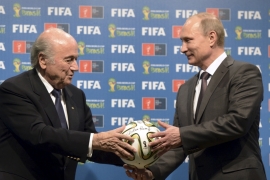